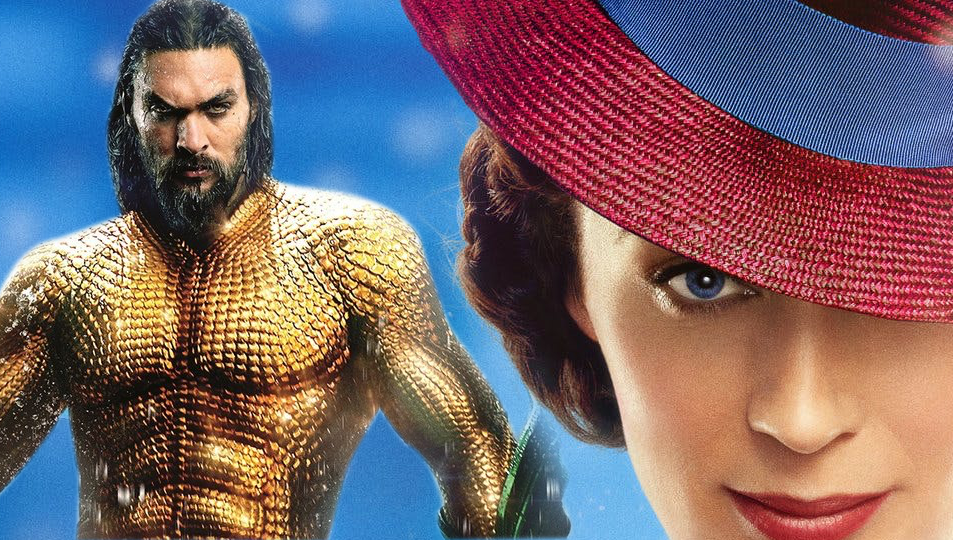 Much like October’s Venom vs A Star is Born race which is headed for a photo finish, December’s highest grossing films look to be a superhero film in Aquaman and Oscar contending musical Mary Poppins Returns. KJ insiders expect Aquaman to jump out to the lead with a 75-80 million opening weekend to Poppins’ 40-45 million (50-55 million 5 day) but for Poppins to close the gap with tremendous weekday grosses over the Christmas break.

DC can breathe a sigh of relief as Aquaman (70% on Rottentomatoes to Poppins’ 77%) is unlikely to be rejected by audiences like Justice League or Batman v Superman: Dawn of Justice. With praise for being crowd pleasing fun, its reviews are closer to last year’s 400 million grossing juggernaut Jumanji. While its legs are unlikely to be as strong as Poppins which is likely to be benefit from awards attention, musicals attracting repeat business (as The Greatest Showman proved last year) and the holiday break always favouring family films, if audiences connect to Aquaman as a fun blockbuster like Jumanji it could benefit enough itself from holiday weekdays to gross over 300 million and edge out Poppins.

Bumblebee is expected to be the lowest opening Transformers film at 30-35 million, but with the best reviews of the series (97% Rottentomatoes) it should gross over 125 million and reinvigorate the franchise domestically. Will Ferrell and John C. Reilly’s Holmes and Watson could be a moderate success at an expected 20 million opening and 80 million total, but the frequency of Holmes adaptations in film or TV combined with with Ferrell having a spotty track record in recent years producing hits outside of the Daddy’s Home series could prevent as big a breakout as their previous collaborations.

Even if it ends up with mixed reviews, Robert Zemeckis’ Welcome to Marwen could appeal to family audiences looking for heartwarming fare on route to a long run to 40 or 50 million. Adam McKay’s Vice is expected to open small, but if it receives Best Picture and Best Actor attention for Christian Bale could have a lengthy run similar to the Big Short which finished at 70 million. The sleeper to break 50 million could be Jennifer Lopez’s return to film Second Act in a market starved for romantic comedies and films targeted at women.