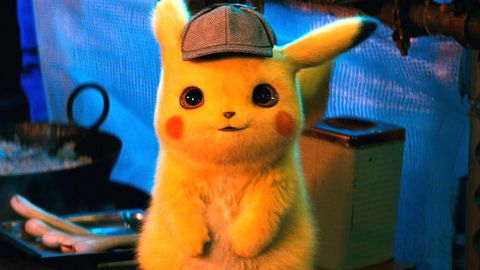 Detective Pikachu and Aladdin headline May

Even with the Avengers push to April, May has plenty of blockbusters to kick off the summer season. Detective Pikachu is the favorite to lead the way with a strong marketing campaign and multi generational appeal. Cute Pokemon appeals to kids but many adults are nostalgic for when they played growing up. Ryan Reynolds in Deadpool form voicing Pikachu also adds an edge to make it cool for adults. Expect an over 100 million opening and 400 million total to start a new franchise.

Aladdin is a wild card with a negative reaction to the first teaser but a rebound in reception in the trailer after. Unlike Dumbo or Mary Poppins Returns which relied on older original films, Aladdin is right in the heart of Disney’s golden era of 90s animation and the original had the same gross as Beauty and the Beast. The novelty of Disney’s live action remakes isn’t as strong as in 2017 and desert films have a spotty record the last few decades, but the popularity of the original and interest in seeing it in live action form should lead to a gross of 300 million.

Godzilla: King of the Monsters follows the 200 million grossing 2014 film. Monster or disaster films are not as in fashion these days and the original film had poor word of mouth, but casting Millie Bobby Brown could have a benefit with her high popularity with teenagers and Stranger Things connection to an era where films like this were more prominent. Look for a gross of 150 million but to make back its 200 million budget performing well overseas.

The John Wick series has become more viral with every instalment. With its operatic trailer look for John Wick: Chapter 3 – Parabellum to set a new high with a 40 million opening and over 100 million total. Rocketman won’t be another Bohemian Rhapsody but the fun of listening to Elton’s songs in a theatre gives it a chance to have a 25 million opening and repeat viewings leading to a 100 million total. A potential breakout is Blumhouse’s Ma which takes a chance casting the normally cheery Octavia Spencer as its villain. It has the horror market to itself but faces a crowded weekend with Godzilla and Rocketman. After Get Out and Us showed the potential for horror films with urban audiences look for a surprise 30 million opener and over 80 million total.

A Dog’s Journey coming only months after the non-sequel A Dog’s Way Home will hurt it but loyal dog owners should lead to a solid mid teens opening and 40-50 million total. With excellent reviews Long Shot will look to fill the vacuum for romantic comedies but Seth Rogen hasn’t been on top of his game at the box office for some time. In the shadow of Endgame it will need to be a leggy hit after a mid teens opening. Poms could be the sleeper 40 million grosser of the month with its aging cheerleaders getting back together plot appealing to a Book Club-like audience.