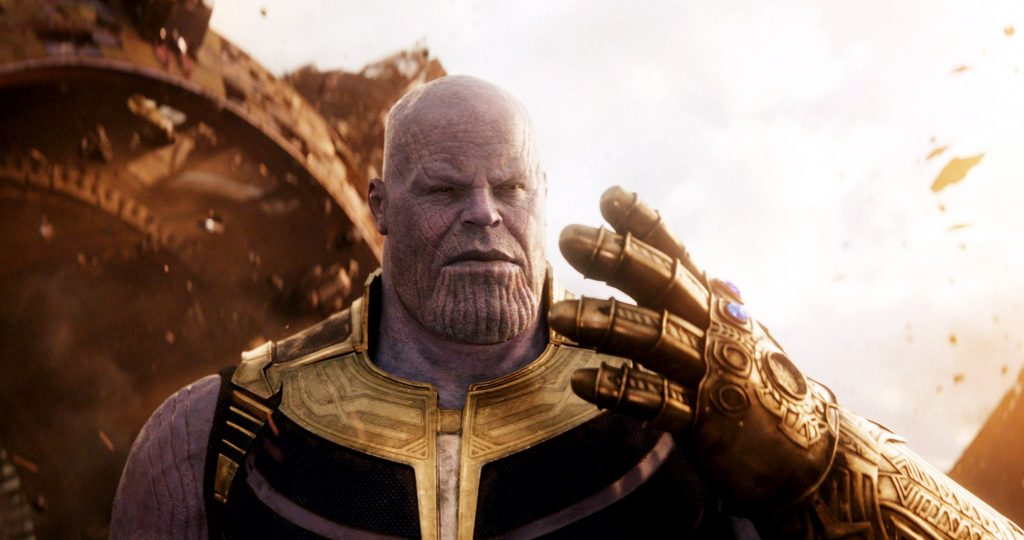 How Thanos reinvented the blockbuster villain

For the Avengers: Infinity War and Endgame to reach the levels of hype they did, Marvel had to deliver on Thanos. They’d given him cameos going back to the Avengers in 2012 as the eventual end all of villains and after all the years of wait it couldn’t have gone over better as perhaps the most popular villain they’ve ever had. (you can vote in our best Marvel villain tournament here)

Nailing a villain can be a key to an action film or superhero blockbuster but many films including many of Marvel’s films have been hit or miss in that area. For example films like the original Iron Man or Guardians of the Galaxy are beloved, but their villains in Jeff Bridges’ Obadiah Stane or Ronan the Destroyer are hardly the reason why. The biggest problem writing a villain is the audience knows he’s going to lose. As skilled, physically imposing or manipulative as he or she may be, in reality they’re still not a threat to come out on top. The hero’s life is never really in danger as precarious a cliff he is dangling from or as powerful a being he’s fighting. However the Avengers allows Thanos to break these rules in several ways. For one the Infinity War cliffhanger allowed him to “win” at the end of the first movie by wiping out half the population. Because they had two movies to beat Thanos, who would come out on top between him and the Avengers by the end of the first part and by what lengths was at the least more unpredictable than usual even if you knew Thanos was making to the next film. In the future the Thanos effect could be to use multi-film villains to give them a moment of triumph and credibility before taking it away in the second film, although this is hardly a new concept as Darth Vader did it nearly forty years ago in the Empire Strikes Back and few films have been able to replicate him. One could have seen the Fast & Furious franchise as in the ideal position to copy the Thanos formula of a major, multi film villain if not for drama between the cast members that seemingly has led to The Rock, Jason Statham and Michelle Rodriguez not appearing in the upcoming 9th installment, and the former two actors perhaps permanently being pushed into their own Hobbs & Shaw franchise instead.

Secondly the Avengers cast is so large most of the mid level characters were in legitimate mortal danger in Infinity War leading to real deaths like Loki, Gamora and Vision. In Endgame even A listers like like Tony Stark and Steve Rogers conceivably could be killed off as Robert Downey, Jr. and Chris Evans will be retiring their characters one way or the other. There is a reason Infinity War opened with Thanos killing a long time staple in Loki as it set the stakes that with him the danger is real and he’s powerful enough to break the usual rules of heroes not dying. It is no coincidence that the Avengers and Game of Thrones are reaching near unmatched levels of water cooler buzz in film and TV this month. Because of the size of their casts it allows the stakes of mortality to be put back into the equations. In films or shows with small casts the stars they do have on the level of Tom Hiddleston’s Loki are too valuable to get rid of, but with the Avengers or Game of Thrones excess of established, well liked characters allows them to axe one and get an emotional reaction out of the viewer without seriously damaging the future of their product.

None of this would have worked however if not for Josh Brolin’s voice performance combined with humanistic CGI allowing him to feel like a real soul who could feel loss such as at Gamora’s death. It’s due to the richness of Thanos that the upcoming battle by the Avengers with him feels as emotional as physical. His goal was not just to be a take over the universe but genuinely believed that it was the right thing to do to eliminate half the population, and some have argued he’s not completely wrong that it would benefit the remaining people. After he succeeded his reaction was not an evil laugh but to rest in lonely isolation. If the villain had come off as flat as one like Justice League’s Steppenwolf it wouldn’t have mattered if they let him win at the beginning of the first movie or let him kill characters. In the end it was the combination of Brolin’s Thanos being legitimately memorable and rich and the Avengers franchise having the freedom to tell his story over two movies and kill off characters in the process that made him one of the most memorable blockbuster villains in recent years.