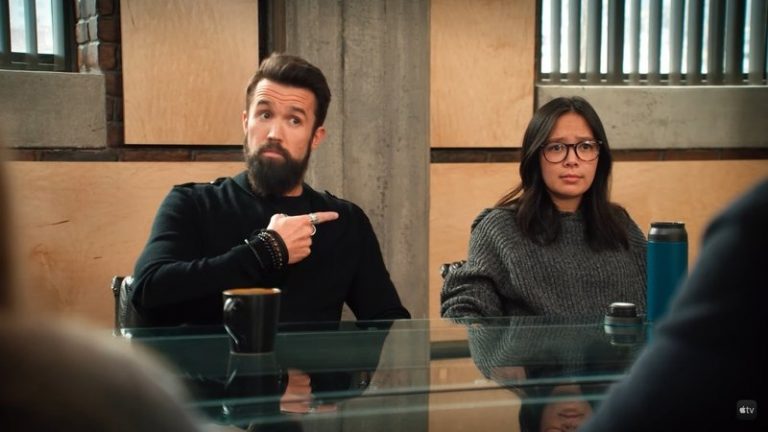 AppleTV’s new comedy Mythic Quest: Raven’s Banquet is set behind the scenes of a World of Warcraft like video game. A gamer Silicon Valley is one of the easier comparisons, although it differentiates itself by its leads being the creators of an already massively popular game.

Rob McElhenney (one of the show’s creators along with Megan Ganz and fellow It’s Always Sunny alum Charlie Day) plays the narcissistic visionary behind the game Ian perfectly, but the show’s heart is his lead engineer Poppy played by Charlotte Nicdao. Nicdao’s face is full of charisma reacting to the comedic situations and showing the frustration of being overlooked compared to Ian. Their conflict is mirrored by a bold standalone episode halfway through the series where Jake Johnson and Cristin Milioti play a couple who’s game lost everything it once was as the franchise became more commercial. Despite their characters not appearing in any other episodes, it’s a perfect mirror foreshadowing the challenges Ian and Poppy will face going forward in their personal and professional relationship.

Other funny cast members include Danny Pudi shaking off Abed typecasting as the sociopathic head of monetization, Jessie Ennis stealing the show as a psychotic assistant, F. Murray Abraham poking fun at overwrought backstory writers, and Elisha Henig as a teenage youtube reviewer with a mass following the game is at the mercy of. Another Sunny carryover David Hornsby plays an uptight producer and longtime video game voice actor Ashly Burch plays a game tester with a crush on a fellow tester played by Imani Hakim. While the representation of a lesbian and black gamers in a romantic subplot is positive, the storyline can feel like an add on.

Despite digging deeper emotionally with characters like Ian and Poppy by the end of the season, the highlight of the show thus far is the humor more than the storylines. An episode where the game is infiltrated by Nazi players is a standout, as is Ian being challenged to a 1 on 1 duel for the ages by a hacker. With nine 30 minute episodes Mythic Quest is an easy watch to blow through in less than a day. It’s one of AppleTV’s best shows to date.