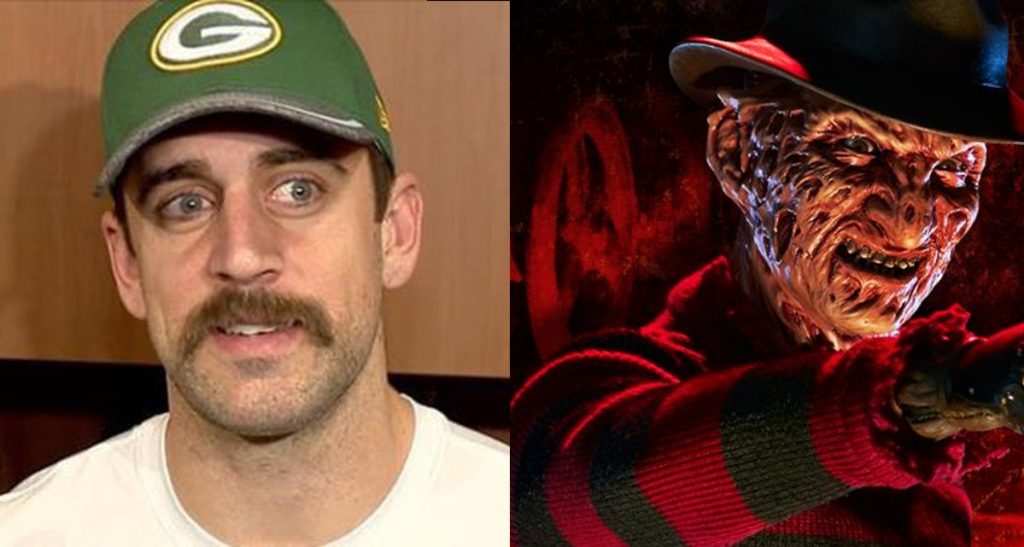 Hello all, welcome back to NFL Horrorbacks. Last time out, we explored which serial killer Tom Brady would best line up with and found out that it was all of them. Naturally, this lead to an expansion, finding that each quarterback in the NFL lined up with one of movie history’s most famous maniacs. It was going very well, until I heard that noise in the basement…

Now I’m in hell. I’m still not sure who sent me, I suppose they are still up on Earth wreaking havoc. Most would look at this as a negative, the ending of my life being a real setback towards the pursuit of analogy. Yet, the opposite has occurred, and thanks to some new first hand research and interviews, I can now be a primary source on these matters and quote my own work as fact.

So now we not only can continue, but must! For the sake of Life and After Life. I’m sure not everyone down here will appreciate my spilling of their secrets, but what are they gonna do? Kill me? And then what? To quote Saddam Hussein “where am I supposed to go? Detroit?” Though, if we are lucky, maybe we can draw my killer out and lure him (or her) into hell, paving the way for my escape from this fiery pit of eternal damnation. But you didn’t come to hear about the potential salvaging of my eternal soul, you want some NFL Horrorbacks, and that’s what I’m here to give.

Spoiler Warning – Some have heavy spoiling, some light, some none

Known for his humor and creativity as much as he is known for what he does with his hands. A-Aron has appeared on Key & Peele, became the poster boy for State Farm and has been involved in more than one celebrity relationship. If not for Tom Brady and his 3 post-35 Superbowls, Rodgers would be the first name of anybody’s “Best 2010 QBs list.” And if not for the everlasting resurrections of Michael Myers, Freddie would be considered the king of horror movie villains. They both have the toolset to be the best but just aren’t, and mostly rely on word of mouth to carry their legends. Rodgers lost his division to Case Keenum and Mitch Trubisky in consecutive years while Freddie loses to human virgins, homosexuality metaphors and freaking Jason who doesn’t even have a brain. Krueger and Rodgers also both have to watch from the sidelines as the VERY SIMILAR Pennywise (feeds on your fears, is it a dream or not?) and Patrick Mahomes (just an awesome player) take all the headlines in 2019. They share the best qualities and the worst.

Always underestimated, despite putting up some seriously impressive performances before even hitting the biggest stage. Sure, neither of these demonic forces had much success when they faced off with the Warrens in the playoffs, but we can’t just forget about everything that came before. I think we’re all expecting Watson to be more like Patrick Wilson and Vera Farmiga (powerhouses in their field) than the real Warrens (probably frauds.) Watson has the weapons he needs this year, Hopkins and Fueller are legit receivers, but Annaballe had all sorts of demons on her side, a very easy to manipulate grieving teenager on the other side, and she still couldn’t get the job done. If Black Shuck (that dog don’t give a fuck) can’t get you to the promised land then maybe it is time to start looking inward.

The thing that people remember about Mr. Bundy, other than the murders and stuff, is that he was a very handsome man. They went so far as to cast Zac Efron in the Netflix movie based on his life’s work. Outside of movies in the real world, being a terrifying monster gives the serial killer away. You always hear how “no one would have ever saw it coming”. If you are one of the good-looking people you can go just about anywhere though. Jimmy G has the same thing going on, where all the football ladies of the world are drooling before he even throws a pass. I think this also works heavily in his favor on the field too. Everybody wants him to be a great QB, San Francisco banked a 2nd round pick and A Lot of Money on this, but he is also constantly underestimated. Because you shouldn’t be able to be really really good looking and also be an elite athlete. In fiction we would call him a Gary Sue, someone who is just good at everything and has little to no character flaw. So yeah, expect some story about Mr. Garrapolo having a secret double life to come out in the next few years, hopefully not involving murder but it wouldn’t be the first time.

What do you do if you spend a ton of money on an investment and then realize, almost immediately, that something is terribly wrong? This is the premise of quite a few haunted house movies, none more famous than The Amityville Horror. This does seem to be quite mean and unfair towards Cousins, but this offense has regressed from Case Keenum (who would be making a fraction of the money) and it is hard to get by that. Cousins looks to be rebounding this year, at least enough to compete for a playoff spot, so that’s why Lutz and DeFeo are listed. One killed their family with an axe. One almost did, broke the curse and saved them instead, then he became Deadpool. Which one will Cousins be in the end?

You’re running from a killer, one who is probably in 3D, and trying to be brave in the face of a very bloody valentine’s day. But what if you are the killer? And what if everybody else is in denial about it too? Such is the fate of Tennessee Titan fans, who desperately want their #2 pick to reach his potential. He has already won two playoff games, more than a lot of the people on this list, but I think everyone can look at the games and see that something is not quite right. And I admit I’ve only seen the remake of this, but it was pretty obvious that Supernatural was the real killer all along.

A brilliant man, now playing in a place that just does not appreciate his efforts. Though even in San Diego, this team was often chased with torches and pitchforks. It was never Phillip that was the source of their ire though. At first it was head coach Marty Schottenheimer, brought back from coaching hell to inflict more crushing playoff losses onto his fanbases. Then it was a series of fumbles, missed kicks and Tom Brady. I don’t think anybody particularly blames Phillip, he had a grand vision of conquering defeat (death in football), but when the results came the fans were not satisfied. They wanted more, they always want more, and the monsters we create just aren’t used to that kind of spotlight.

Did you know there have been six Wrong Turn movies? Six! It has to be considered the most impressive performance by any direct-to-video franchise. And that’s what Matthew Stafford feels like, an impressive direct-to-video quarterback. His career numbers are actually pretty good, yet how many times have you watched him play in a big playoff game? He has made it three times and won zero, despite a pretty solid 3 touchdown day back in 2011. Yet here he stands, one of the highest paid athletes in the world. So just like Three Finger (the only surviving mutant in the first movie) he has found a niche for himself, but their audience is always going to be limited.

Audiences everywhere chose The Grudge as their next big horror franchise, when it opened to a then-eye-popping $40M and closed with around ~$120M. Sure there were red flags everywhere in the movie, but the people still wanted it bad. In essence, it is the same as the Bears trading up to draft Mitch Trubisky instead of just waiting for a proper sequel to The Ring. Could have had Mahomes, could have had Watson, but the Bears wanted that raw talent they believed could be turned into a champion. Maybe he will one day, and maybe the upcoming Grudge remake will respark that franchise as well. I just can’t help but think what Mahomes would look like with this defense, and if we’d all have been better off with Samara as our primary scary ghost of the 2000s.

Because he actually killed people.

Because he killed somebody and got away with it. Fans of the Baltimore Ravens and Sharon Tate are totally fine with this.

My work has attracted the attention of a prominent demon down here. And while He has requested to remain nameless (not that I’d be able to spell it anyways) He actually just offered me an all expenses paid trip to Purgatory to figure it out. The Middle World seems a little boring, and I’m not sure how juicy our stories will be though. When I raised this concern, He offered me something even better – the identity of my killer! Now that is something I just cannot pass up. I don’t need revenge but my curiosity must be satisfied. Was it someone I already listed, stabbing me in the dark with unending rage? Or someone not listed, afraid of what I might say? I guess there is only one way of finding out – take me to the light!

Coming Soon: NFL Horrorbacks Week 3: Escape From Hell pt. 2 – The Final Chapter Or The Extraworldly Adventures of The One That Is I