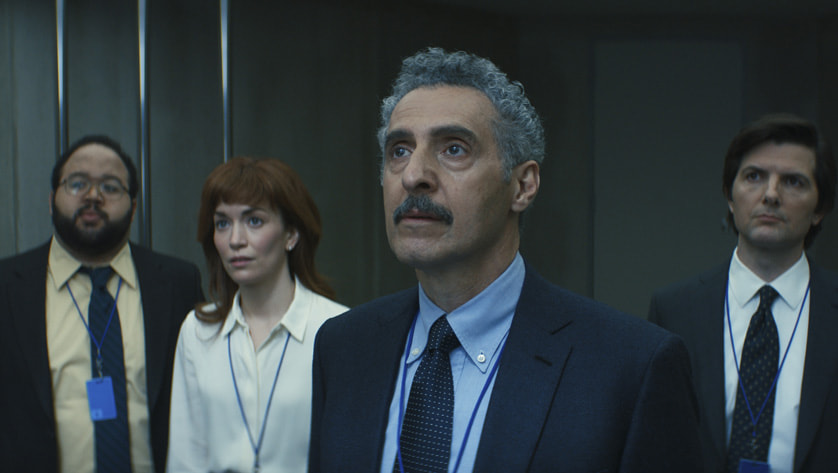 AppleTV’s Severance is one of their most ambitious shows to date. Using the sci-fi concept of people having their work memories and real life memories separated in order to protect confidentiality, the series looks to delve on philosophical questions of identity, for example are the severed different people despite sharing the same body? Ethically the procedure is also a quandary, which the show dives into by revealing in the outside world the procedure is drawing the ire of protesters.

With no chance of the severed going home and spilling the beans, this unique power is exploited at this particular industry Lumen, which operates more like a sinister cult environment that you’re not allowed to escape from. When an employee steps out of line, they are taken to the “break room” by the unsettling Milcheck (Tramell Tillman) where they are subjected to verbal conditioning resembling an audit in Scientology. Milcheck’s boss Harmony (Patricia Arquette) is deliciously creepy and villainous, although its revealed by the 3rd episode even she answers to someone.

Despite being blank slates the real life personalities can’t help but bleed into characters in inconvenient ways for its bosses. The newest employee and audience’s conduit Helly (Britt Lower) is rebellious and wants out, while the oldest employee Irving (a fantastic John Turturro) is all in on Lumen and loves it and its rules more than they love him. Mark (Adam Scott)’s friendship with a former employee Petey triggers something and changes his destiny. The 4th worker Dylan (Zach Cherry) is fun loving but yet to take center stage through three episodes.

The show runs into a dilemma, how do you make it interesting when their cubicle jobs of sorting coded numbers cannot possibly sustain a plot? For one thing, they expand the Lumen building to include other rooms, so far there’s a museum-like room, a therapist when workers morale is slipping, and a mysterious two person Optics and Design department, sure to play a key role as Christopher Walken plays one of the members.

In addition, half the show takes place outside Lumen, with only Mark’s outside self revealed so far. It’s hard not to find these scenes less compelling than the at work halves, in part due to how great the trio of Helly, Irving and Cherry is as his work mates, while Mark’s pregnant sister and brother-in-law do not feel as compelling. However the show bringing the work life to him by Harmony interjecting into his outside life and the escaped Petey helping him put together the pieces makes it more compelling.

Severance can be described as a “mystery box” show in the subgenre of ones like Lost or Westworld. Its trajectory will be to start with unanswered questions and slowly answer them and expand its world. What’s in the code they’re sorting? What’s in the other rooms? What’s the executive class of Lumen like? The biggest test for it will be what happens if and when the work versions regain their memories and the outside world storyline becomes the whole show. Nevertheless, even if the day comes the show blows itself up in a way it never comes back from, it will be fun to get there in the meantime.