Truth Be Told has complex characters, but can bite off more than it can chew 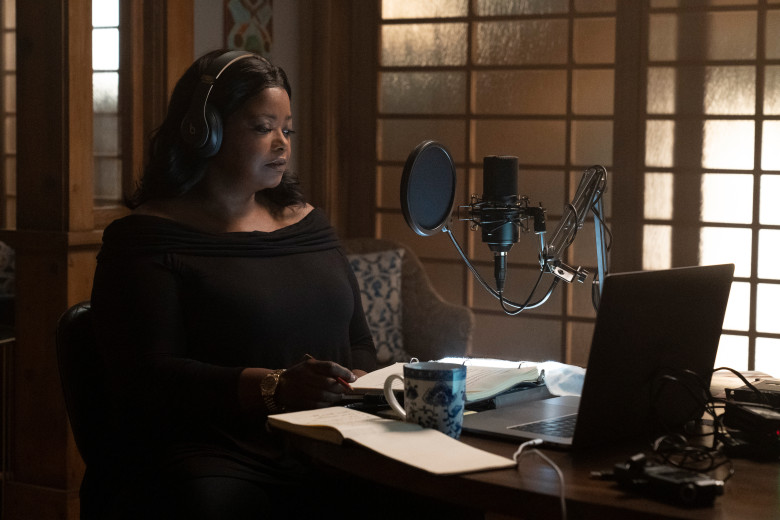 Truth Be Told’s case and victims are engrossing, but makes an awkward fit with its lead character’s personal life

Like HBO’s Sharp Objects, Truth Be Told mixes its true crime story while using it to explore its investigator’s family demons. A Serial-like true crime podcaster, Poppy (Octavia Spencer) revisits a case from 20 years ago where she rushed to paint the would be murderer Warren Cave (Aaron Paul) as guilty, only to now have doubts. Furthermore complicating it is that Cave now identifies as a Nazi and even if innocent of murder was still robbing houses explaining how his fingerprints were found at the scene. While Poppy suspects Warren only adopted his Nazi identity to protect himself in jail, it still brings up ethical questions of whether it’s worth it for Poppy to go to such lengths to get a likely bad guy either way out of jail. Furthermore to get there Poppy has to drag up the past to the victim’s twin daughters (both played by Lizzy Caplan) or dig up secrets such as her father’s affairs or mother’s alcoholism. It brings up the question of whether Poppy is interested in the family’s well being, or whether she’s sacrificing them for her own selfish benefits – both absolving her guilt and giving her a hot podcast.

As the adult twin daughters, Lizzy Caplan stands out in dual roles with one twin living a clearly affected life from the trauma of the incident, guilt over putting Warren in jail and being separated from her twin. Her twin, now living with a new name and fake British accent and resistant to her life being dug up, is as affecting. Elizabeth Perkins as Warren’s breast cancer diagnosed mother is effective, and Aaron Paul as Warren has one of his best roles to date as the tormented Warren, mixing in sympathy with danger.

Unlike the home dynamics of Sharp Objects, the exploration of Poppy’s personal life has more mixed results thus far. Poppy’s ex-boyfriend and former cop Markus (Mekhi Phifer) is a charismatic presence, making up for a subplot that with another actor could have felt unnecessary. However tension at home with her husband (Michael Beach) and especially the scenes of her unstable, jerk father (Ron Cepha Jones) feels a stuffed-in add on to the Cave case, although there is still time to weave his history and resistance to her digging any farther into the case. The plot with her father also give Spencer some of her best moments as her emotionally traumatic past thanks to her father relates to the victims.

Truth Be Told is trying to juggle a lot in the first few episodes between Poppy’s family and the case, and the mix is not always smooth. However in both cases it’s reflective of complex characters with a past full of trauma and decisions they regret, and who are hiding secrets from the world and their loved ones. On that level watching the layers be peeled one by one and figuring out who they are and who’s telling the truth is entertaining in itself.