Which horror villain is your NFL QB? 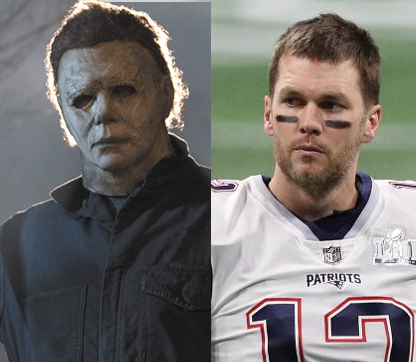 As we make our way towards Halloween, people are watching horror movies more than ever before. They are also looking for horror movie characters in real life like never before too. Since real-world monsters aren’t so easy to identify, I am here to help.. a little. I can’t tell you if your neighbor Dustin is going to sneak into your apartment and skewer you into a stew, but I can tell you which NFL Quarterbacks best line-up with horror movie icons. Will this be useful in your quest to survive until dawn? Maybe, maybe not. But should you find yourself in a spooky situation with any of these men, at least you will know how to best react.

Note: Some of these have heavy spoilers, some have light, some have none. If you want to stay clean on a movie I’d recommend just skipping it and returning later.. if the night allows you.

Never dies, as efficient as ever at an old age, perhaps even more judging by the box office and body count of David Gordon Green’s Halloween and the last four Superbowls. Myers also has sometimes brilliant, sometimes maniacal coaches in Dr. Loomis and New Dr. Loomis, who recognize him as a pure form of evil. One wishes to hold him back to spare the world while the other wishes to unleash him to wreak havoc upon the world. I think we know which one Bill Belichick most relates to. Also known for doing strange things with family members. Now I don’t want to imply kissing your tweenage son on the mouth is the same as killing your sister in cold blood.. but still. Brady could have been linked up with any famous killer, but I think Myers is the GOAT in this category and as much as it pains me to say it, so is Brady.

Physically towers over all of his victims while methodically eliminating them. Has two Superbowl rings, one as a messy slow burning underdog and the other an action packed romper. Has a habit of sneaking up on people in unexpected places, like bathrooms, and when the damage is done all the corporations pretend like nothing happened. Always looks like he has the advantage, but continuously gets defeated by the same person (Tom Brady/Ellen Ripley).

The It quarterback right now, Patrick Mahomes has spent the last year breaking all kinds of records for a young quarterback. Also familiar with breaking records is everyone’s favorite shape-shifting clown, opening to $123M in the fall of 2017, more than doubling the current record (held by either Signs or Paranormal Activity 3, depending on your definition of horror.) That’s just about the box office equivalent of throwing for 50 touchdowns in your first year. These seemingly unstoppable forces are only ever derailed by off the field/page issues from Andy Reid and Stephen King. One might wonder, since he does It with such ease, why doesn’t Mahomes just throw a 50 yard touchdown pass every time and why doesn’t Pennywise just bite the arm off of every kid? It seems these two are encouraged to play with their food rather than going right for the kill. For Mahomes, It cost him a Superbowl spot last year, and for Pennywise It cost him his life, or whatever you would call the existence of Dead Lights, since the Losers he so easily could have killed at any point came back for him.

Seven days. For his first go around, if the next name on your schedule was Baker Mayfield you were dead, the tape itself being the killer. That’s what we call Feeling Dangerous. After a slow, but still better than expected start (a $15M opening was better than average for a horror movie in 2002 and earned the #1 spot and Baker lead a comeback win against the Jets), they looked even better the following week in defeat. The Ring actually rose 23.1% on pre-Halloween week, but came in second to a surprise breakout of the first Jackass movie while Baker put up 43 points against Oakland, losing in overtime thanks to some questionable officiating.. and defense.. and coaching. Surely they would come back down to Earth the following week, but The Ring only dropped 2.2% following Halloween and Baker was able to defeat hated-rival Baltimore Ravens. Everything was looking peachy, and people naturally assumed their sequels would perform even better. To the dread of all Browns fans, this has not been the case. And while The Ring Two’s $76M performance was fine in a vacuum, it only made about 75% of the first’s earnings and completely collapsed after a softer-than-expected opening. Can Baker avoid this fate? He’s got 10 more chances and has to deliver on at least seven days (or nights). Part 3 did open on Superbowl weekend after all.

Another seemingly unstoppable monster who punishes other teams for their reckless (read: unChristian) behavior. Jason has unlimited stamina, and while he may only ever walk slowly towards his victims, if he sneaks up on you it’s over just as quickly as Lamar running past your linebackers for a huge gain. However, Jason sometimes gets credit for stuff he hasn’t even done. He isn’t even the real killer in arguably the best movie of the entire series. And Lamar’s offensive line is so good that his running backs could probably get the same chunk yardage that he does. Are they really frauds in disguise? Well … no. Jackson still has to prove it in the playoffs, but has greatly improved as a passer this year, just like Jason has greatly improved as a runner in the remake – he can kill people much quicker if they are trying to steal his weed.

Eli Manning’s clone has emerged from the sewers to take his place on the throne. And, just like the Tethered, he is physically stronger and faster than his surface counterpart. So far, I haven’t seen Daniel Jones take a liking to scissors, but if he becomes a barber later in life it will make a lot of sense. Also, much like the real Red, he is massively successful when given the opportunity, yet was so easy to forget about on the bench. It makes you wonder about all the backup quarterbacks and disenfranchised people of the world, the nature of privilege and whether everyone has the ability to cash in on their big moments. Dwayne Haskins sure didn’t, and has been banished back to the sewers because of it. Will he reemerge after a little more rabbit and join Danny, Teddy Bridgewater, Landry Jones, Gardner Minshew and Kyle Allen in their Backup Quarterback’s Hands Across America at the end of the season?

Dalton, otherwise known as The Red Rocket, has had a decent run, making the playoffs several times although never going anywhere further than the first round. Now though? His career as a starter is pretty much over, yet the Bengals keep throwing him back out there. He will surely be replaced by one of the top college QBs in the draft this year, but Dalton doesn’t seem to be sweating it. The Bengals are winless, but they did show a little bit of life earlier in the season, nearly pulling off the upset against the Seahawks. There’s the thing, if you aren’t paying full attention the zombies can still get you, popping out of any place that may have seemed safe. Yet if the other teams just execute their game plan, there’s no reason Dalton should be able to beat them, and there’s no reason anyone should be caught by a creature that can barely walk.

It’s been awhile, but the four straight Superbowl losses still linger over Buffalo football. So one would not blame their fans for losing the spirit of Christmas, considering that time of year is usually unpleasant and unsatisfying for them. Not only are they bitter about their own cold fate, but they have to watch their much more successful division rival win the Superbowl every damn year. Enter Josh Allen, who isn’t quite as accurate as Krampus (he gets shit done and kills everyone in the movie), but has already provided fans with a sense of hope and then snatched it away almost immediately. Yet, there’s no doubt he is improving, so maybe instead of sending his entire family to hell he will instead lead them to a happy winter, the first in so very long.

He lies dormant most of the year, just waiting for his opportunity to strike. Then, bam!, the QB he is behind gets injured, the fans chant FOLES FOLES FOLES and he comes in to tear some defenses apart. It wasn’t supposed to be that way this year as Foles got big money to actually be a starter, having proven himself the last few playoff games in Philadelphia. An unfortunate injury on week 1 ended that fantasy though, and rookie Gardner Minshew has been much better than anyone thought possible. So, it now looks likely that Foles will remain on the bench even when he recovers, and that Jacksonville has a good chance of making the playoffs. Minshew needs to watch out for hooks … and bees, because Foles will be there waiting for a chance. The Candyman remake will come out next June, will Foles be in attendance wearing two Superbowl rings???

Once a major player on the scene, he mostly just talks now, but is surprisingly even more effective.

You thought that Brown going crazy over his helmet in the offseason was a twist, but the real twist is that he was crazy the whole movie.

Thus concludes the festivities. I hope you enjoyed yourselves and have a safe evening.

Actually, I heard a noise in the basement. I better go check it out. I’m sure it’s nothing.